As part of this week's return to school for Ohio's 1.8 million schoolchildren, we at Innovation Ohio have posted what amounts to most of the education-related material it's done during the Gov. John Kasich's years.

The material is pretty damning.

However, there is an additional fact that speaks to Gov. Kasich's historic divestment from public education. Because Kasich has committed the smallest share of the state budget for education since 1997, local property taxpayers have seen more property tax increases than any first three years of an Ohio governor's regime on record. 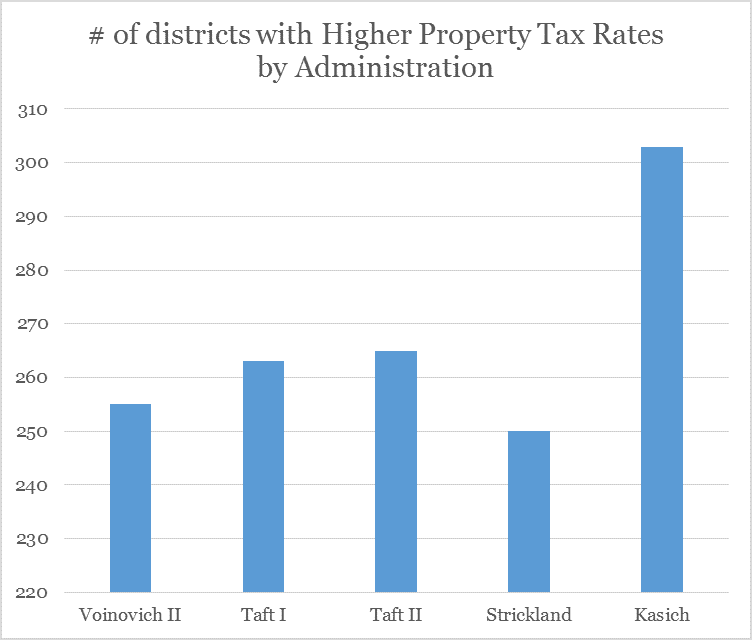 As you can see, according to the Ohio Department of Taxation, property taxpayers in more school districts saw their property tax rates (total gross rate) go up in the first three years of the Kasich administration than at any other comparable time since 1994 -- the earliest record available.

Remember that the Ohio Supreme Court ruled four times that the state needed to rely less, not more on property taxes to pay for schools. As you can see, the exact opposite is occurring under this governor.

Quite a record.
Posted by Stephen Dyer at 2:29 PM

However, in a brief filed August 4 before the Ohio Supreme Court, the Ohio Coalition for Quality Education (OCQE) -- the most radically pro-charter advocacy group in the state (whose president, Ron Adler, is actually defending the horrors at Horizon Science Academies) -- argues that considering for-profit and non-profit charter school operators who collect as much as 97% of the taxpayer money sent to charters as "public officials" would irreparably harm kids.

What's more is that Chad Readler -- the chairman of the subcommittee examining education policies in the Ohio Constitutional Modernization Commission -- wrote this, bringing his objectivity on public school funding into clear question.

Here is their whole argument, just so I can't be accused of taking it out of context (though I will add emphasis to spare you having to read the whole thing):

"4. The public official theory would have damaging consequences forcommunity schools.

There are undoubtedly other unforeseen consequences of the trial court's decision as well.

All of these new judicially imposed legal requirements would not only impose new compliance and other regulatory costs on management companies, but they would also change the business model under which management companies have operated in this State (and nationally) for years.

The proposed rule of law would essentially rewrite the management agreements as public contracts. Inevitably, management companies will need to alter the way they structure their agreements and, ultimately, run their businesses, potentially leading to inefficiencies, if not an undermining of the quality of education available at community schools.

I look at this in utter amazement. I want to know simply this: does anyone other than the for-profit management companies think it's bad policy for companies that receive 96% of the money sent to a charter school to have to be subject to public audit, public records, or public ethics laws? Charter school operators have never been accused of not being brazen, but this is amazing.

I know there are responsible charter school advocates who feel these provisions -- holding operators to the same level of public scrutiny as public schools -- are absolutely essential to improving charter school performance. So I won't attribute OCQE's position to the entire sector, but someone in that sector needs to publicly disagree with this position. Like now.

And the "efficiency" argument? Bunk.

White Hat Management (the subject of the lawsuit) receives more state money per pupil than any other for-profit charter school operator (could it be because its founder, David Brennan, has contributed nearly $4 million to Ohio Republicans since the program began?). In fact, the $7,793 per pupil it receives is more than all but 10 of Ohio's 613 school districts receive from the state -- districts that have to comply with all the provisions White Hat and OCQE claims would be a "detriment" to their success.

And remember that the Stanford Credo study found that Ohio's charter school kids are, on average, a full marking period behind their public school brethren in Math and a third of one in Reading.

So I ask you, would it be so terrible if charter school operators that caused this failure were forced to change the way they've previously done business in Ohio, and to actually be accountable to the taxpayers, whose money they have been eagerly taking with little consequence for 16 years?