Always Do Your Runs BEFORE You Introduce School Funding Legislation

State Rep. Andrew Brenner, R-Powell, has introduced his school funding bill, which would be a radical change from the way we fund schools today. He would essentially eliminate local property tax levies, create a statewide property tax, roll that into state funding, then give every kid a set amount of per pupil funding that could be used at any public, charter or private school in the state -- essentially getting rid of public schools as we've known them and turn public education into a massive voucher program. 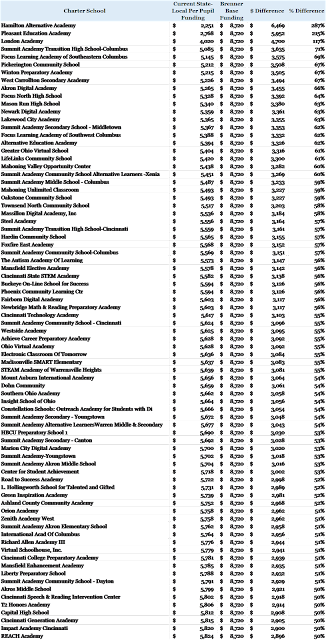 While I actually like the idea of creating a statewide property tax to lessen the need for local levies, eliminating the ability of local communities to invest in their kids as Brenner calls for is misguided. And I would never suggest that we roll all the education money into one pot to be equally distributed to all school types. Why? Well, because that means ECOT -- yes, that ECOT -- would see a massive funding increase and most districts that perform far better than ECOT would get cut. A lot.

How is this so? Because ECOT would now be able to access that one area of school funding that so far has been off limits to all but a few Ohio charters -- local revenue.

In Brenner's bill, he sets the new per pupil funding level at $8,720 per pupil (plus categoricals, but I'll discuss that later). While that's a big boost from the state's current $6,000, don't forget that he's outlawing local property tax levies. So in order to do an approximation of economic impacts for kids, you have to add together their current state and local per pupil revenue, then subtract it from the $8,720 to find out the minimum amount that each school gets.

Surprise. The 270 largest percentage increases go to charter schools, with ECOT seeing at least a 55% per pupil increase. And this is before categorical funding (additional money sent for poverty, special ed, etc.) is included. So we're looking at perhaps as much as doubling funding to some charters, and nearly doubling the per pupil funding to ECOT, which can't graduate even 4 out of 10 kids.

In fact, 85% of charter schools would be in line for increases as large as 287%, with an average 39% increase for the 334 charters that would see increases just on the minimum funding level (we have just about 380 charters). I have provided you with just 79 the charters that will receive a 50% or greater increase based on Brenner's minimum funding level.

Meanwhile, there are 115 school districts (of 613) that would receive per pupil increases, but the average increase is a far more modest 6%, with a top of 22%.

So, the minimum per pupil funding level Brenner's plan would provide would give 85% of charters increases and 85% of districts cuts. While categoricals will adjust these numbers, overall you see the pattern -- massive benefits to kids in charters and massive detriments to kids in districts.

Then, perhaps, he would understand why he has no co-sponsors on his bill.
Posted by Stephen Dyer at 9:53 AM 8 comments: