ECOT gets an A in Achievement because kids weren't chronically absent. Huh? 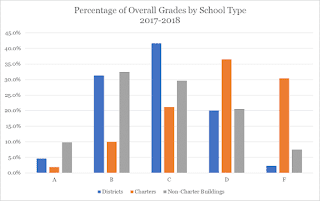 The new state report cards just came out with overall grades being issued for the first time. And outside of telling us what every report card has told us over the years -- namely that Ohio's school districts and buildings perform far better overall on state report card measures than charter schools -- there's an interesting outcome for the Electronic Classroom of Tomorrow (ECOT).

ECOT has never done well on the state report card. Of the 53 possible grades it could have received through the 2016-2017 report card, it got 46 Fs. It was especially bad in the components that make up the overall achievement component. The overall grade is determined by merging the six categorical grades (Achievement, Growth, Graduation, Cap Closing, Improving at-risk K-3 Readers, and Prepared for Success).

This year, ECOT got an A in the Achievement Component.

How can this be when ECOT has historically been the worst performing school in the state? The answer lies in the fact that ECOT closed half way through the year. So the school did not get graded on several components that it traditionally bombed. The only Achievement category indicator it was graded on was meeting state indicators -- raw test score information. Schools can be graded on up to 26 different indicators, depending on how many students the schools tested that are in each category. For example, if a school doesn't have high school students, it won't be graded on the performance of high school students.

I kid you not. It was chronic absenteeism.

Last year, 13.5% of ECOT's kids were listed as chronically absent. This year, it was 7.5%, which met the indicator and qualified as an A.

That's right. The school that ripped off taxpayers by at least $200 million because it charged for kids who were never there, or were absent for whole months and seasons of time got an A from the Ohio Department of Education because kids weren't chronically absent.

So when you see that ECOT got an A in Achievement on the state report card, let's perhaps take that with a grain of salt.
Posted by Stephen Dyer at 1:14 PM 6 comments: 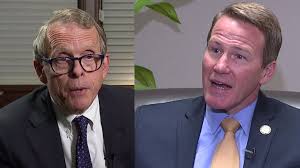