For ages, it seems, this country has been obsessed with closing achievement gaps between demographic groups, whether by race, ethnicity or poverty. And we've seen some significant improvements in gaps, but they still exist, to the chagrin of many, including me.

However, a new study by Stanford of the United States' international testing performance (the overvaluation of which is an issue for another day) indicates that perhaps this achievement gap obsession is actually paying off.

The study found that the achievement here is smaller than any similar country.

Here are some of the findings:

This result points out something pretty significant: all the efforts, including our more controversial shift to more test taking accountability over the last 30 years has worked to some extent for our nation's neediest youth (yet, interestingly, it hasn't worked as well for our nation's highest performers).

So on this, our education reform efforts have had success. Now the bigger question is, does it matter? Time will likely tell the whole story. And was it worth it? Time, too, will tell that story. Is it worth giving 8 year olds test anxiety? Are the better results indicative of a better, more vibrant economy? Is the achievement gap improvement going to improve the lives of traditionally disadvantaged youth? Last I checked, the African-American unemployment rate of 16-24 year olds remained double that of their white countrymen, despite the improved achievement gap.

And this brings me to my main point -- one that is espoused by Yong Zhao and others -- do these tests have any bearing on a country's health or future success? We've never scored well on international tests, yet we've been the world's dominant political and economic power for the better part of 8 decades. We have the world's best overall quality of life and most stable democracy. And this is with our kids scoring at or near the bottom of international tests.

Maybe we should fixate less on our achievement gaps on these tests that seem to have very little predictive impact on a country's future well being and figure out how to close our most troubling gap -- the employment gap. Education can play a roll. But if this data indicates anything, it's that closing education gaps can't fix our employment issues all by themselves. That requires more work.
Posted by Stephen Dyer at 2:11 PM

Ohio Auditor: Charters have far fewer students than state pays them to educate

In a disturbing new report from State Auditor David Yost, officials found that at one Ohio charter school, the state was paying the school to educate about 160 students, yet none, that's right, zero, were actually at the school.

And that's just the worst of a really chilling report, which, if the results are extrapolated across the life of the Ohio charter school program, means taxpayers have paid more than $2 billion for kids to be educated in charter schools who weren't even there.

Here are the takeaways:


This means that more than 1/2 of all the charter schools chosen at random had significantly fewer students attending their schools than the state was paying them to educate, while 90% had at least some fewer amount.

This is a big deal because charter schools are paid out of state revenue originally intended for school districts. If that money isn't actually educating those students, then the children in the local districts are being hurt twice -- once because they have significantly less state revenue anyway due to the charter school deduction, then again because the money is going to a school that isn't even educating those students.

Yost came up with several recommendations, including more frequent counts, better reporting and practices that allow sponsors and the state to better flag potential issues. But the point is this: We've had charters for 16 years in Ohio. We've spent now about $8.3 billion on them (through the first January payment report). If the headcounts have been as off as they were during this random audit, which was an average of 28%, during the life of the charter school program, then we've paid $2.3 billion for kids that weren't even in the charter schools. I'm not saying that's how much has been spent, but it tells you something of the scale of Yost's results.

And remember this audit came during the height of what has been an unprecedented level of charter school scrutiny in this state, so you would think charters would be minding even more Ps and Qs than usual.

Kudos to Yost for doing this much needed work. Now it's up the legislature to fix this before any more tax dollars are wasted.
Posted by Stephen Dyer at 2:49 PM 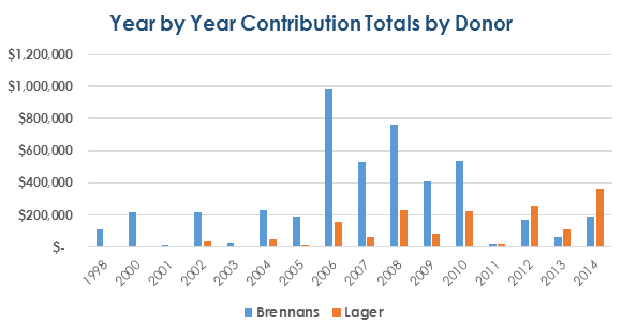 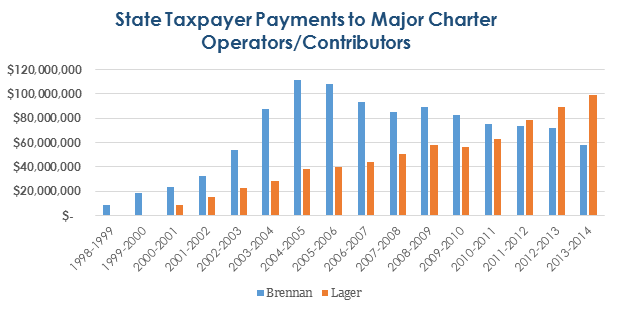 Ohio Falls from 5th to 18th in EdWeek Rankings

In 2010, Ohio, for once, could crow about its education achievements. The state had just passed a landmark education reform plan that won the Frank Newman Award from the Education Commission of the States, denoting the country's most "bold, courageous, non-partisan" education reform of the year. That package included a new school funding system that the folks who sued the state over its old funding system said put us on the path to constitutionality.

About this same time, Education Week put out its annual Quality Counts report and rated Ohio's education system as the country's 5th best overall -- the state's highest rank ever on that report.

Fast forward to this year. The state ditched that award-winning finance system and reforms. In its place, the current governor tried to replace it with one that was so panned in 2013 that the legislature essentially dropped it and adopted a funding scheme from 2005. The state's charter school system has become a national embarrassment. And then today, EdWeek released its Quality Counts report. And now, Ohio's education system ranks 18th in the country.

Now there are issues with EdWeek's rankings, as there are with any rankings. But the Quality Counts report is put out by a serious publication and impartial journalists who look at many measures of success and struggle. It's about as unbiased and quality an overall assessment of the country's education system as you could find.

In 2010, only Maryland, Massachusetts, Virginia and New York rated ahead of Ohio. Now it's those four plus Wyoming, Pennsylvania, Vermont, Connecticut, Rhode Island, New Jersey, North Dakota, Maine, Minnesota, Illinois, Wisconsin, New Hampshire and Delaware. Only 13 states had a bigger dip in rank during that time period.

What could account for the drop? Any one of a number of things have played a part. But suffice to say, Ohio's leaders have overseen a precipitous drop in Ohio's education system -- a drop that our kids simply can't afford. As a parent of two school-aged children, I want action.

While much of Ohio's education policy air has been sucked up by the debate over charter schools, their efficacy and what to do about them, I hope legislators and leaders take note of our precipitous drop in these rankings. Many of Ohio's education policy struggles stem from our state's charter school disaster. But these rankings indicate that perhaps there's more going on.

Remember that 90 percent of our state's children do not attend charter schools. Let's not, I pray, forget their needs. For we do at our peril.

I have to say that I was a bit surprised by the recent rhetoric of the leaders in the House and Senate regarding education.

In the Senate, where many of the most reasonable and practical legislators on the issue are genuinely working toward meaningful improvements, President Keith Faber went to his "education deregulation" card and talked about how more money isn't the answer to education. It's hard to square this "we'll cut money for you, but don't worry, we'll cut mandates so you won't complain too much" philosophy with the serious minds in that chamber.

Meanwhile, in the House, where members of the Education Committee actually want to eliminate the public education system, cut $5,000 checks to parents and let them send their kids where they can afford -- quality be damned -- Speaker Cliff Rosenberger (who infamously took a junket  to Turkey with the embattled Gulen affiliated schools) talked about trying to figure out how to improve the chances of all students' success.

For the last several years, the reasoned, practical and most thoughtful voices on education have resided in the Senate, while the more strident and damaging voices resided in the House (thanks in no small measure to the hatred of teacher unions and love for charter school operator David Brennan displayed by Speaker William Batchelder). It seems as if the current leaders in the two chambers, though, have very different visions from their rank and file.

Of course there is a huge caveat here: first-day legislative rhetorical rarely, if ever, turns into reality.
I just find it fascinating to see whose vision ends up ruling the day in the Ohio House and Senate. The pull and tug between leaders and members on this issue will be interesting to watch.