I have had my run-ins with Fordham's Terry Ryan over the years, no doubt. Most recently we went a couple rounds on Diane Ravitch's blog. However, I always respected the heck out of him, even though his occasional tunnel vision on School Choice and other issues drove me nuts. As I'm sure mine did for him.

I've cut and pasted Terry's 12 lessons below -- just the titles, for space sake:

1) Ideas matter over the long haul, but campaign cash and raw interests carry the day in the near term.
2) No one welcomes accountability.
3) Yet accountability is really important.
4) School choice empowers parents.
5) The state budget is a terrible venue for revamping education policies.
6) Education governance in Ohio is broken.
7) Today, city-based school reform is the most exciting development in Ohio education.
8) Really good schools can make a huge difference in the lives of kids.
9) Risk taking should be rewarded and encouraged.
10) Teachers need to be recruited, nurtured and rewarded.
11) Ohio needs to rewrite its charter school law.
12) Ratcheting back the rhetoric around school reform could do some good.

I would quibble with a couple things. Sorry, Terry. Couldn't help myself!

It's not entirely accurate to say that no one welcomes accountability. Teachers unions signed onto the new Teacher Evaluation System that was developed in the Ohio Educator Standards Board and provided up to 50% of a teacher's evaluation to be determined by test scores. High performing Charter Schools all but begged to have their funding tied to success in the last budget. But the state wouldn't do it. So there are responsible parties on both sides of the spectrum that do, in fact, welcome accountability.

And as for School Choice empowering parents, in Ohio it only empowers the parents who take those alternative educational opportunities. Far more parents choose to remain in the traditional public schools than don't. And, unfortunately, right now that choice is hampered by the state's Charter School funding system because every kid not in a Charter School gets about 6.5% less state revenue than the state says they need to succeed. In Cincinnati and Columbus that amount is about 25%.

Imagine the exciting things that could be happening in those two cities if kids there had 25% more state funding?

Ultimately, though, Terry's overall perspective -- that too much politics is involved and the state needs to reward teachers while fixing things that are clearly broken -- is a perspective we all should take to heart.

I hope Terry finds a good foil in Idaho. My only regret is we weren't able to partner on some of the many things we agree on here. Terry's brand of forceful, yet reasonable advocacy for free market reforms will be missed. Fordham will be challenged to replace him!

I often lament that it was well-heeled politicos rather than Terry who implemented Charter Schools in Ohio. I think we'd be a lot better off had the state listened to Terry rather than their campaign contributors.

As for Idaho, I've been to that amazingly beautiful state a few times and have seen the Snake River Canyon several times. I offer this as a suggestion to Terry and his family: Have yourself an Idaho Spud - not the potato, the candy bar. It's amazing!

Cutting through the Rhetoric

Here's my letter to the editor for one of my local newspapers, the South Side Leader:

To the editor:What the Ohio General Assembly did last week to education is extremely troubling. While legislators are trying to fool the public into thinking that somehow they increased money for education, in fact, school districts are receiving $515 million less than they received from the state three years ago.

Three out of four Ohio school districts have less state revenue than they did then, including Green ($1.4 million), Manchester ($1.3 million), Mogadore ($389,000), Springfield ($1.1 million), Copley-Fairlawn ($2.8 million), Coventry ($760,000) and Revere ($3.5 million).And these cuts don’t include the additional money districts will be losing to charter schools, 70 percent of which will rate an F on the new report card. Currently, every kid not in a charter school loses 6.5 percent of their state money because charters remove so much from districts. Nearly every dollar sent to a charter from a South Side News Leader-area district goes to one that performs far worse than the district.

Finally, every district will be subject to losing money to private school vouchers, even if the school is highly rated.

In short, this budget represents an attack on public education. In the 2010-11 school year, 50 percent of the revenue for education came from the state — the first time that’s happened in three decades. Today, that number is back down to about 47 percent.

The Ohio Supreme Court has ruled four times that the state’s duty is to reduce the need for property taxes to pay for schools. This budget will continue to increase the need. Since 2011, a record $1.3 billion in new levy money to fund operations have been before Ohio voters as property taxpayers continued to foot the bill for our legislators’ constitutional failure.To add insult to injury, since the state decided to eliminate state support of property tax cuts in this budget, anyone who voted for it will have voted for what could be the largest property tax increase in state history.

What's amazing, is this letter could be written about most every area of the state. Yet that's not what many are saying, accepting $1.8 billion less for education as the state's new funding reality. I fail to understand how it can be with a budget that has billions more in revenue than the one from three years ago.
Posted by Stephen Dyer at 10:26 AM

One of the most important Education Policy developments coming out of this recently passed Ohio biennial budget wasn't even contained in the budget itself. It's contained in the reaction to it.

As I have reported at 10th Period, the budget disproportionately helped poorly performing Charter Schools, especially those of major campaign contributors. In fact, schools run by David Brennan and William Lager received 38% of all the increase to Charter Schools, even though they only have 9% of the schools. In addition, those two major Republican Party financiers (between the two of them, they've given about $1 million since 2008, mostly to legislative and executive branch leaders) received 19% of all the state revenue going to Ohio's Charter Schools.

A growing coalition of high-performing Charter Schools and Charter School quality advocates have had enough, though. And in the Akron Beacon Journal yesterday, they finally spoke up. Take this quote from Greg Harris, Executive Director of Students First Ohio -- the Ohio arm of conservative Education Policy darling Michelle Rhee:

"Harris has only one explanation for how funding would be distributed.

Harris and other charter-school advocates lobbied Ohio senators a month ago to increase the investment in the state’s highest-performing charter schools.

The charter-school movement was meant to offer better choices for parents, who would invest in the best options by enrolling their children in high-performing schools.

“Twenty years into the [national] charter movement there are no more excuses,” Harris said. “Our funding policies have to be reformed accordingly. And that is not reflected in this [state] budget.”

But that’s what the next two-year state budget would do.

Or try this comment from the top-rated group of Charter Schools in the state:


“Not only will high-quality charters not get funding, but low-quality charters could get a boost. That can’t be right. No legislator in their right mind would get behind something like this,” said John Zitzner, president of Friends of Breakthrough Schools, the marketing and fundraising arm for Citizens Academy East and other top-performing charter schools.

I can't emphasize enough how momentous these comments are for the progress of School Choice in Ohio. I can't think of a time in the history of this state where any Charter School advocates have dared suggest that Brennan's ability to benefit from state legislators didn't also benefit those who didn't contribute millions of dollars to politicians. But perhaps enough is enough. Here's how the Beacon story concluded, perhaps nailing down the explanation for this new-found anger within the Charter School community:

The biggest winners in this budget are dropout recovery programs that cater to high school students.

Brennan operates at least 17 such facilities, with two in Summit County and one in Stark. Each of the 2,476 students who attends the centers, most of which are named Life Skills, would bring in an additional $1,438 on average under the proposed budget. That’s a $2.41 million bump, or 10.7 percent of the entire $22.6 increase in basic state aid for Ohio charter schools.

Life Skills serves about 2 percent of the state’s charter-school population.

These Life Skills facilities, like all dropout recovery programs, are also some of the state’s least regulated charter schools. They’ll be the last to receive a grade under the new report card. Academic standards for measuring these schools won’t be determined until the end of next year.

While these programs attempt to educate the most challenging of students, they often have graduation rates in the single digits.

In order to remain open, these dropout recovery programs would only need to improve graduation rates by as little as one percentage point to meet regulations added to the budget by the House.

An amendment later added by the Senate calls for dropout recovery programs to receive “separate report cards that do not include letter grades and are subject to separate closure standards.”

Exactly. This is how it has always worked for Brennan. The difference is today, even Charter School advocates are fed up with the games. Time will tell whether that's enough to change the conversation in Ohio from one of Choice for Choice's sake to better Choices. As I've said over and over again, in Ohio we could invest heavily only in the high-performing Charter Schools and still have enough money remaining to fund universal pre-school throughout our state.

Even though it seems like this budget is miles away from that outcome, perhaps it's a lot closer than we think. Now it is up to the legislators and Gov. John Kasich to heed these reasonable calls for temperance on the investment in poorly performing Charter Schools. The chart I have inserted below shows the percentage of state funding Ohio's kids who aren't in Charters have lost to Charters since the program's inception. You'll see it's pretty much been a steady increase since 1998, topping out last year at about 6.5%.

That means every child not in an Ohio Charter School loses, on average, 6.5% of their state revenue because Charter Schools remove so much money from school districts. And the vast majority of that money goes from districts that perform better than the Charter School to which they lose the money. Yesterday, that trend may have started to change. 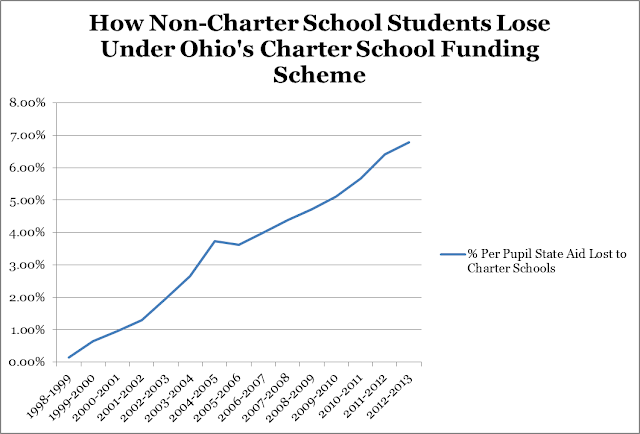