One of the more interesting -- and telling -- datasets now available with the state report card is how kids who graduate from Ohio's schools perform after they graduate. For example, we now know the percentage of graduates who have a college degree within 6 years, as well as how many graduates have enrolled in college within 2 years of graduation.

Looking at these two metrics, it's remarkable how bad charter school perform. Overall, Ohio school districts have 5 times the rate of students with college degrees that charters have. And Big 8 urban districts (Akron, Canton, Cincinnati. Columbus, Cleveland, Dayton, Toledo and Youngstown) have twice the rate. 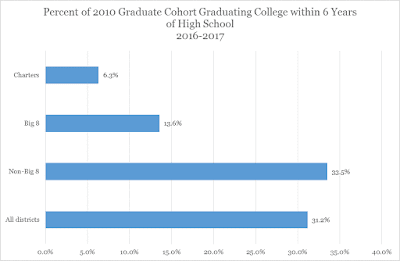 Meanwhile, of the 31 Ohio charter schools that have graduates counted for this metric, 7 (23 percent) had zero graduates with college degrees within six years of graduation.

And the Electronic Classroom of Tomorrow? That's right.

Only 109 of 3,794 ECOT graduates from 2010 have a college degree today. That's an amazing 2.9 percent. Cleveland -- which had about 100 fewer 2010 graduates as ECOT (not to mention far greater rates of poverty, special education, and minority students) -- had about 3.5 times as many graduates with college degrees as ECOT.

There is only one Ohio charter school with a higher percentage of college graduates than the average Ohio school district -- The Dayton Early College Academy at 42.4 percent -- a remarkably good rate given that Dayton City overall had a 13.6 percent rate. DECA's rate is about the same as suburban districts like Gahanna-Jefferson and North Olmsted, which, considering that about 98 percent of their students come from Dayton, is a great achievement.

But remember that DECA is the exception, not the rule. 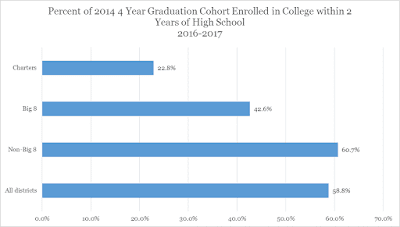 Not surprisingly, the number of charter graduates who have been enrolled in college within two years of their high school graduation is also far lower in charters overall than school districts.

Ultimately, education is about preparing children for lifelong success, not just test scores. Earning a college degree substantially increases lifetime earnings and decreases the likelihood of citizens needing to access the social safety net, as well as running into trouble.