I Strike a Nerve and Fordham Attacks 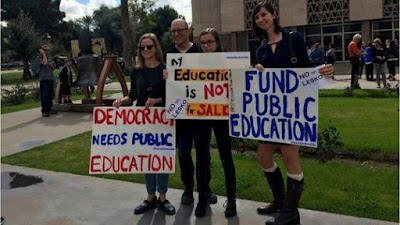 I guess I should have figured this was coming, but apparently my recent posts about how poorly charter schools do on performance index, college graduation, and closing achievement gaps relative to local school districts finally sent was too much for my friends at Fordham over the edge.

In what can best be described as a exasperated, indignant scream wide-ranging, personal attack, Fordham's Jamie Davies O'Leary -- with whom I've enjoyed a respectful dialogue in the past and hope to continue to do so -- finally lets loose and doesn't assail what I said really, or even deal with the fact that charters do perform worse than districts; she lashes out at attacks me for daring to compare charters with districts in the first place.

(Earlier posts included language that I thought accurately reported the tone of Jamie's piece. After thinking on it for the weekend, I agree with her that my choice of words could be seen to have carried with them an unfortunate gender stereotype. That was not my intent. However, out of respect for Jamie and all women, I have changed the language to be more neutral and am sorry for the unintended overtones.)

I have explained why this is a perfectly fair comparison many times, but given Jamie's diatribe, I suppose I have to re-cap this for everyone.

In Ohio, when a charter school receives a new student, the state sends the school $6,000 (plus more for categoricals, but that's a long story) from the pot of money the state was going to send to the district the student came from.

The problem is what if the student would have received only $3,000 from the state if she had remained in the district?

What happens is that the $3,000 in state revenue the state would have sent to the district for that child is shipped off to the charter, but, so is $3,000 meant for EVERY OTHER KID IN THE DISTRICT.

It doesn't take long for that disparity to add up to real dollars -- dollars that local taxpayers (many of whom do NOT have kids in the schools) have to fill in to keep pace.

Because this is what the state data say.

According to the final state payment made to school districts from June, there were 1.7 million students in Ohio set to receive $7.95 billion in total state aid. That's works out to $4,657 (I'm rounding here) for every student in local public school districts.

According to the report, $898 million left school districts last year for charters (a district-by-district breakdown I received from the Ohio Department of Education puts that tally at $935 million, so there's that). Leaving with that funding were 113,613 students.

So, after losing the funding and students to charter schools, the remaining 1.59 million children in Ohio school districts were set to receive $7.05 billion in state revenue, or $4,425 each.

That means that the charter deduction costs every kid in Ohio school districts, on average, $231.51.

So if this profound a change in state funding is going to happen for the 75 percent of children who remain in Columbus City Schools, or the 93 percent of children who remain in Ohio's local public school districts, we'd better be damn sure it's worth it. Is it worth removing $1,141.62 from kids in the best performing school in Columbus so thousands of kids can go to ECOT, for example (ECOT is the largest recipient of charter school transfer funding from Columbus)?

Now my friends at Fordham often complain that charters don't get local revenue. And while that's true, I fail to see how that justifies removing millions of state dollars from kids in local school districts. If the legislature believes in school choice so strongly, then set aside $260 million or so to make up for the lack of local revenue.

Stop taking it from the 1.59 million kids who aren't in charters.

Anyway, this funding problem is the primary reason why I use charter-district comparisons.

I could go on. But suffice it to say if you're funded like a district. If you're considered a district for federal grant making purposes. If your funding comes from every student in every building in a district. If kids in 608 of 613 districts lose state funding to charters. Then, dammit, you don't get to have your performance judged only with the worst performing buildings in the worst performing districts.

Nor do you get to only count certain report card measures, especially when you were the greatest champion for an A-F report card that Fordham claimed would help parents "discern quality". Unless, apparently, those grades are bad in most measures and those schools are charters.

I also take serious issue with O'Leary's main premise -- that I'm somehow standing up for districts while she is standing up for kids. It's in the title of her piece "Schools were meant for kids, not the other way around". This is a common argument made by pro-charter school advocates: those who dare question charter efficacy clearly are just trying to protect bureaucrats while charter school advocates are White Knights charging to children's defense.

This saccharine, sanctimonious appeal is so much hogwash that it would sweep the hogs upstream.

In Ohio, 93 percent of children attend school districts. The state's charter school funding system means $231.51 fewer state dollars, on average, for that 93 percent of students. How is standing up for the rights of the 93 percent of kids in Ohio's school districts to not have their funding cut by school choice programs anti-student or anti-parent again? 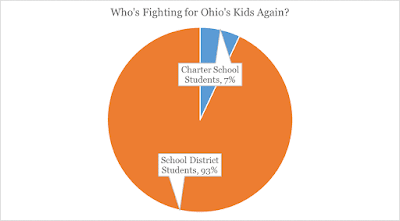 Seems to me that standing up for the rights of 7 percent of the kids and parents to the detriment of 93 percent of kids and parents is far more anti-student and anti-parent. Especially when the performance of those buildings to which the 7 percent move is, for the most part, so comparatively dreadful.

As I've said a million times before (though it appears some just won't listen), I am not anti-school choice. But if we are going to have school choice, we must create a regime that encourages quality school options for students while funding it in a way that doesn't hurt the 93 percent of students who are not in charters.

Until this state wakes up and addresses these two fundamental flaws, I will oppose what we're doing. And, yes, Jamie, I will compare charter school performance with school districts'.

I wish my friends at Fordham would take the same pledge, but their dogmatic adherence to the sanctity of parental choice has blinded them. Not all school choice advocates are so blinded, though. Some have looked at the last 20 years of results and said ,"I think it’s not helpful to expect parents to be the agents of quality assurance throughout the state."

My friends are Fordham are simply trying to hail a cab that is blocks away, headed in the wrong direction. And that's a shame.