It's official: Vouchers explode in Ohio 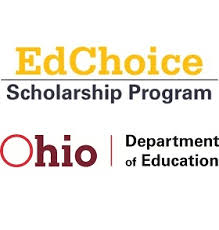 I was concerned this would happen after the budget was passed, but even I didn't think the absolute explosion that's happened to Ohio's voucher program would happen this fast.

How fast? Try a $47 million jump from last year to this year. Ohio school districts now lose $330 million to vouchers that pay for students to attend private, mostly religious schools. And the school year isn't even halfway complete. Another enrollment period happens after Jan. 1. So we may be looking at $350 million lost to vouchers by the end of this school year.

And this is just the voucher deduction. There a whole other explosion going on in the EdChoice income-based voucher program, but since it's not a pass-through deduction from school districts, it will be more difficult to track.

Despite that, some districts have been absolutely devastated by these increases. Take Scioto Valley Local in Pike County. Two years ago, they lost zero students to vouchers. Last year, they lost $9,720 to vouchers. This year? $103,600.

That's $100,000 that Scioto Valley had coming from the state two years ago that they no longer have. That's a lot of money to Scioto Valley. They only raise $148,000 for every voted mill they put on the ballot.

But it's not good really anywhere. Cleveland's losing another $6 million. Parma $2 million. Middletown $485,000.

And even wealthy suburban districts are getting hit.

Rural districts are getting hammered too, with some losing more than 400% more money this school year than they did two years ago. And even though it's not millions of dollars, some of these districts only raise a few tens of thousands of dollars for every mill of property tax they can put on the ballot. So in relative terms, these dollar losses can be even more devastating than the millions more lost in some school districts.

What gives? Well, there are now more than 1,000 school buildings who have qualified to be a voucher building, which means at some point in their past or present they received a D or F on one of several report card measures between 2014, 2018 or 2019 (2015-2017 were classified as safe harbor years because of the many testing changes that occurred then).

But it doesn't matter if those buildings had As in everything else. If they received a D or F in two of those 3 years on overall performance, student growth, graduation, or the third-grade reading guarantee, they are now eligible to be a voucher building.

So now you have buildings in some of our state's wealthiest, highest performing districts eligible for vouchers. Like Parkside Elementary School in Solon, which is traditionally a top 5 or 6 performing school district in the entire state. Or Barrington Road Elementary School and Hastings Middle School in Upper Arlington.

But not really. This has always been the plan. It's why Akron industrialist David Brennan started vouchers in the first place more than 20 years ago. His goal was to get the state to pay every student to attend Akron St. Vincent St. Mary's High School.

It looks like Mr. Brennan, who died last year, will finally get his wish thanks to the millions he and his acolytes spent on Ohio politicians since 1997.

Here are the top 25 districts in the state who have lost the most money between this year and last year to the voucher deduction: 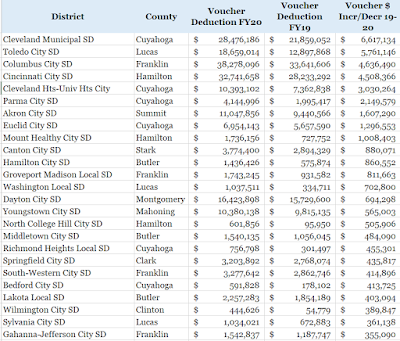 And here are the 25 school districts whose increased deductions to vouchers have increased by the largest percentages between last year and this year: 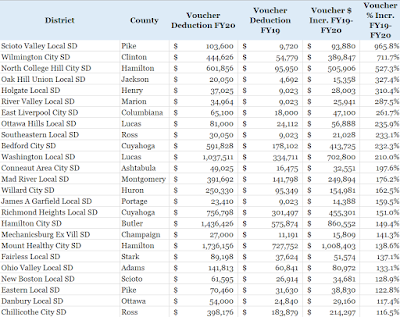 Posted by Stephen Dyer at 12:47 PM No comments:

Speaker's got a curveball. But is it a good one? 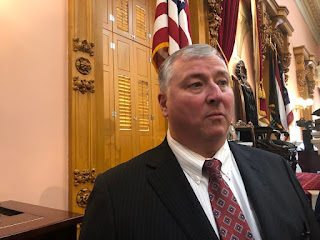 Well, that was unexpected.

During the debate on fixing Ohio's school funding system, much time has been spent poring over the Cupp-Patterson funding plan, now encapsulated in House Bill 305, which had its 6th hearing yesterday in the House Finance Committee.

And while much has also been made of how about 2/3 of the Ohio House has signed onto the bill, one conspicuously absent name is House Speaker Larry Householder, who lives in the same county where Ohio's school funding lawsuit originated.

We finally heard something from the Speaker yesterday and it threw people for a loop. He wants to potentially "redistribute" local revenue to help handle the $1.5 billion (or more) cost of fully funding the plan in HB 305.

While not a new idea (when I first ran for office in 2006, I suggested a statewide property tax to provide the local share of education's base cost), suggesting something like this out of the blue was a bit surprising.

This could be good or bad, depending on how this is done. I'll go through a few of the options and what each could mean for schools and kids.

1) The Brenner redistribution. Remember when now-state Sen. Andy Brenner suggested rolling everyone's local and state money into one pot, then redistributing it to every school, public, private and charter? Yeah, that led to big cuts in school districts and huge increases in charter schools. Couple that with his banning of additional local levies, and you can see why he had only one sponsor hearing on this bill. Householder is most likely not suggesting this.

2) Inside millage. This is something I've heard around for a couple years now. On all our tax bills, there is an automatic 10 mill charge that every property owner in Ohio pays, on top of the voted mills we pay. The inside millage is divided up among schools and local governments. He may be suggesting taking all of those mills and giving it to schools, or taking all the inside millage, sending it back to Columbus and redistributing it back out to school districts. This isn't an awesome idea because it would remove money from local governments (which have already been decimated by local government fund cuts) and agencies to fund schools. But it's much better than Brenner's disastrous plan. He could also be suggesting raising the inside millage to something like 15 or 20 mills and taking the millage above 10 to all go to schools. That would be better for local governments, but would likely be met with stiff resistance in his caucus.

3) Create a statewide property tax for basic education. This would be the best idea -- create a statewide property tax that the state would calculate to provide the local share of the cost of the new school funding plan. That way communities wouldn't (in theory at least) have to vote for more levies to pay for basic needs like books and teachers. Local levies would be used instead to pay for relative luxuries -- 8 years of French, orchestra programs, etc. This is kind of the Holy Grail for Ohio education funding. And it would eliminate the need to use endless levies to pay for education. But I'm not sure that Householder would want to create something like this that would require a constitutional amendment, which requires large numbers of votes in both legislative chambers.

4) Raiding local revenue. It would be a real world problem if his idea is to take a bunch of locally raised and voted on money, then redistribute it to other areas. It's not that the idea doesn't have merit; it's just that I live in the real world and I can't imagine the uproar if local property taxpayers are seeing their voted property taxes going across the state.

We don't know which, or combination of which idea(s) Householder is contemplating here. But he's undertaking a key attack on our unconstitutional funding system -- the overreliance on property taxes to pay for schools. There is no question as a Perry County Speaker, he gets the issue here. And I believe he wants to do the right thing to fix this mess.

If the plan he's talking about would say that the state now has a formula (under Cupp-Patterson) that accurately calculates student need, and it's going to base the local share of funding on a levy amount that doesn't have to be constantly voted on, then it's a good thing.

If he's raiding local revenue from some areas of the state and giving it to others, that creates a whole new set of challenges.

But they're not impossible to overcome. A plan like this is how Wyoming -- the state judged by Education Week as having the country's best, most adequate and equitable funding sytem in the country — pays for its school system. The state of Wyoming takes money from districts that raise more than they need locally and redistributes it to districts that don't raise that kind of revenue.

The problem with doing that in Ohio is we have a long history of keeping local revenue local. Asking our state to change its outlook on locally raised money will be quite a challenge.

Posted by Stephen Dyer at 12:58 PM No comments: