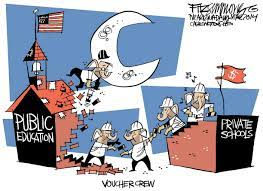 The reason this canard is so pernicious is simple: It's not true, and in fact, the opposite is true. Vouchers are disproportionately distributed to white students, leading to greater overall segregation in public school districts and communities of color with substantially fewer state resources to educate students in those communities.

This is the stat that voucher proponents love to quote, and it's what Greg Lawson (a guy I actually like personally, despite our profound policy differences on this and nearly every issue) from the Buckeye Institute articulated in the Dispatch story yesterday:

"Greg Lawson of the Buckeye Institute said the data on who takes vouchers varies from school to school, but overall more minority students use EdChoice.

Ohio is about 82% white, according to data from the U.S. Census Bureau. But 50% of the students who take an EdChoice scholarship identify as white or non-Hispanic, according to the Ohio Department of Education.

'The choice is there for everybody regardless of what demographic box they check,' Lawson said."

What Greg and others "forget" is that EdChoice doesn't apply to every school district in the state. In fact, according to data from last school year, only 164 of Ohio's 613 school districts lost any state funding to the EdChoice Voucher transfer last year -- a $164 million deduction from districts' state aid. However, 95% of that funding came from just 38 school districts. Want to take a gander at the demographic makeup of those 38 districts? You guessed it. Overwhelmingly non-white. How overwhelmingly?

Why would he try to repeat the 82% stat when only 1 district in the entire state that loses substantial state aid to EdChoice fits that description?

Because if only 50% of the voucher recipients are non-white, yet the communities from which the students come are almost 70% non-white, it kinda kills the whole "giving people of color an opportunity" argument.

The lawsuit addresses this nicely by looking at community and school makeups. However, another way to look at it is at test takers because that's the only demographic data we have readily available for voucher recipients. As the Cincinnati Enquirer reported a couple years ago, so many voucher recipients were never in the public schools to begin with that large-scale demographic breakdowns are next to impossible.

Here's what we do know. In Lima, about 35% of students in the public school are white. Yet there are 5 private schools taking EdChoice vouchers from Lima -- all taking at least $242,000 or more from Lima City Schools' state aid. Here are their proportion of white EdChoice recipients:

Again, this demonstrates pretty clearly that vouchers, rather than granting students of color greater opportunities, instead are granting white students greater opportunities to leave their more racially integrated public schools and attend a more racially segregated private school option. And in the meantime, it's leaving districts with substantial majorities of non-white students with less state revenue with which to educate them.

Sounds like the program actually results in a bad overall outcome for communities of color, doesn't it?

(Notice how voucher proponents never discuss the impact of their program on students who don't participate in it. I digress.)

This is not just a recent phenomenon, either. In 2002, Policy Matters Ohio looked at the Cleveland Voucher program, which at the time was the only voucher program in the state and served as the model for the 2005 creation of the EdChoice voucher. What did they find?

"Students in the voucher program, in addition to being more likely to come from private schools or from higher-performing public schools, are less likely to be African-American than students in the district at large. Just 53 percent of Cleveland voucher students were African-American in this school year, while 71 percent of Cleveland Municipal School District students last year were African American, according to a separate analysis by Catalyst and the Northern Ohio Data and Information Service at Cleveland State University’s Levin College of Urban Affairs."

Seems that for more than 20 years now, legislators have known that vouchers are disproportionately going to white students, yet they have done nothing to address this.

Oh yeah. One more thing. It was interesting to read that not even the outrageously histrionic Aaron Baer mentioned in the Dispatch the whole original argument for the voucher program to begin with: it provides better options for kids in "failing" public schools.

That's because we now know, thanks to more than a decade of comparative testing, that vouchers actually harm student achievement.

Even the Fordham Institute -- an avowed voucher proponent -- agreed in 2016 when it found that vouchers actually reduced student achievement. This was affirmed in 2020 when the Cincinnati Enquirer looked at test scores of voucher recipients and compared those scores with scores of students in the communities in which the private school resided. The paper found that 88% of the time, the public school students outperformed the private school students.

To voucher proponents now what matters now is the choice, not the outcomes from that choice apparently.

But hey, let's throw hundreds of millions more of our tax dollars at this thing.

Or...maybe someone ought to sue.