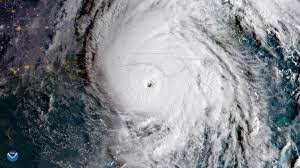 The Ohio Senate is about to vote out a so-called "fix" to Ohio's voucher explosion. However, it only really deals with the cliff that is approaching and ignores the fact that for many districts, the storm has already hit and at full force.

How bad is it? Well, $62 million more is leaving school districts for private school vouchers this January than left last January. And this "fix" will not slow down that increase. T
his has profound effects upon school districts, which in many cases had almost zero dollars headed out the door to vouchers just two years ago.

In addition, the loss of state revenue means school districts have to come up with local revenue to make up the shortfalls. In some cases, a lot of revenue. For example, in North College Hill outside Cincinnati, the owner of a home of median value in Ohio (about $150,000) would have to pay another $222 in property taxes just to make up for the ADDITIONAL $589,000 voucher loss between this and last year.

Here are the 25 districts that would require the most money from median home value owners in their districts to make up for the additional losses between this and last year. These calculations do not include money already headed out the door to private schools other than the increased losses this school year, which has been driven by the EdChoice debacle. 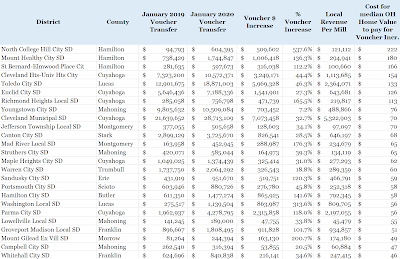 The voucher "fix" current under consideration would do nothing (I repeat) NOTHING to fix the current problem in front of our face.

Districts will still need to go to the ballot to make up for these additional losses. They're still facing massive new funding shortfalls with little to no state revenue to offset it.
This program is exacerbating the reliance on property tax issue that forced the Ohio Supreme Court to rule four times the way we fund schools violates the Ohio Constitution.

School districts must receive some sort of state funding relief from this onslaught by the voucher zealots who think that investing more and more in a program whose proponents say result in worst academic performance.

Just because you avoid a Cat 5 hurricane doesn't mean the Cat 4 you're standing in is a calm breeze.

It's still a hurricane.

And it's still dangerous.
Posted by Stephen Dyer at 12:33 PM No comments:

One of the highlights of my journalism career was a series of stories I wrote at the Akron Beacon Journal with colleagues Doug Oplinger and Dennis Willard during the 2002 gubernatorial campaign. It was the first real examination of how Ohio's rankings on various quality of life issues had changed since 1960. And we found that we had become poorer, less healthy and less educated compared with how we stacked up with other states in 1960.

One of those questions was about college tuition. Here's the result from the Day 3 story (which I was the lead writer on):

"According to a poll done by Zogby International for the Akron Beacon Journal, nearly 75 percent of Ohioans felt tuition at a public university should be less than $5,000. Almost 40 percent want the ceiling at $2,500."

So I decided to look at the Fall 2019 tuition at Ohio's public colleges and universities. Only five four-year schools had tuition below $5,000 ... per semester!

Not a single Ohio four-year college or regional campus cost less than $5,000 a year.

Even adjusted for inflation, that $5,000 in 2002 ($7,619, according to the U.S. Bureau of Labor Statistics' Inflation Calculator) was more than all Ohio public four-year tuition at every public university except Central State. 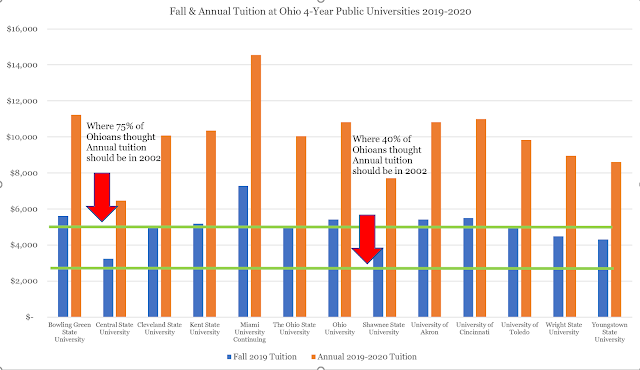 As a state, we began to turn the corner on Higher Education investment during the 2019 budget, which I commended the state for doing. But wow do we have a ways to go before we can meet that modest expectation of Ohioans from 18 years ago. A ways to go indeed.
Posted by Stephen Dyer at 11:22 AM No comments: