Innovation Ohio has released a report that details how the way Charter Schools are funded in Ohio has hurt kids both in Charters and in the schools that lose children and money to Charters.

As I've said many times before, I'm not against Charters. I do not like how they're funded in Ohio. And I don't like how poorly they've performed overall.

We must fix this. For all our kids.
Posted by Stephen Dyer at 1:46 PM

In an earlier post, I tried to explain how flawed it is for Gov. John Kasich to bet his education plan on per pupil valuation. I thought explaining how it would take 191 years for folks in Noble County to catch up to Olentangy's capacity to raise a mill of revenue, if Noble County continued growing its property wealth at 66% every five years.

Yet today in the Ohio House of Representatives, Kasich's Education Funding Czar Barbara Mattei-Smith called Olentangy "Property Poor". That's right. A district that raises $3.2 million on a mill is property poor, according to Mattei-Smith. That's why a district as property wealthy as Noble (which raises $125,000 on a mill) should sacrifice state funds so kids in Olentangy can get over 320% increases. Or so went the argument.

Since apparently I was unable to make my case effectively with the 191 year thing, here are two charts. The first shows the difference between Olentangy and Noble's per pupil valuation, which is what Kasich is trying to "equalize" (and not very well at that). The second is a graphic showing the difference between Olentangy and Noble's ability to raise money on one mill of property tax.

Which do you think, dear reader, best describes the property wealth disparity in this state? 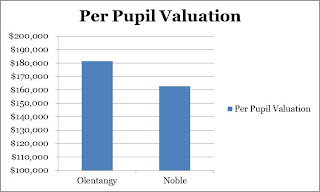 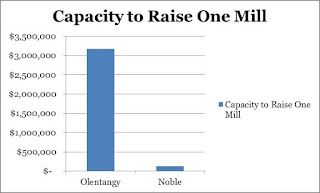