ECOT Bills State for Students ... AFTER IT CLOSES

The Electronic Classroom of Tomorrow told the Ohio Department of Education on Jan. 23 that it still had 5,580 students, and the state should pay them for educating those students. Trouble was, the school closed Jan. 19 -- four days before that payment was sent to the department.

That's right. It appears ECOT wanted to be paid for students it said it was educating after the school had closed.

To the Department's credit, they issued no taxpayer money to the state's once largest virtual school based on their Jan. 23 request. But the fact that ECOT, even after the end had come, demanded taxpayer money for educating kids everyone knew weren't there because the school had closed, put a rather tight, ironic bow on this school's sordid history.

Remember, it was the fact they couldn't prove they educated $80 million worth of students over the last two years, which then the state demanded they repay, that led to the school's abrupt closing last month.

But that closure didn't stop ECOT from continuing to demand taxpayers give them money. According to department reports, ECOT's February monthly payment to charter schools is based on data received by the state Jan. 23 -- four days after the school officially shut down.

Fortunately for taxpayers, the school only billed the state for 5,580 students -- not the 11,876 students the school claimed it had enrolled on Dec. 24, 2017 -- the last date ODE looked at prior to the school's closure.

And that doesn't include the $30 million payment the school was supposed to cough up in return for charging taxpayers $60 million for students the school couldn't prove it actually educated in the 2015-2016 school year (another $20 million in overpayments was discovered later by ODE for last school year).

So while the state did its job and didn't pay ECOT for kids it claimed it educated while it was closed, the fact that ECOT actually charged taxpayers for this is incredible.

What a scandal.
Posted by Stephen Dyer at 2:59 PM 4 comments:

ECOT argues in Supreme Court tomorrow that it should be paid for educating kids it can't prove it educated. Really.

Tomorrow, ECOT will argue before the Ohio Supreme Court that even though it can't demonstrate that more than 60 percent of the students it charged taxpayers for educating actually engaged in educational activity, it should still receive taxpayer money because they could have been educated by them.

The state forcing the school to re-pay taxpayers $80 million for kids it can't prove ever engaged in any learning experiences at ECOT is eventually what led to the Educational Service Center of Lake Erie West to drop the mega-virtual school last month, forcing the school to close and leaving hundreds of staff and thousands of families in a lurch -- a lurch caused by ECOT founder Bill Lager's love of money and fancy houses (owned under the name NestEgg Development, LLC. I can't make this up) 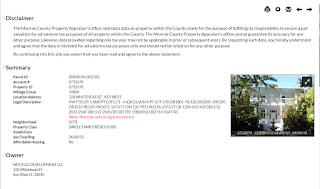 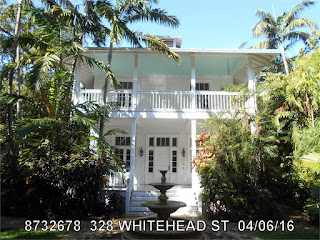 And while it appears that finances will be what shuts down the state's first and largest online school (though in a welcome departure from pure finances, apparently the Insight School of Ohio, run by K-12, Inc., which also runs the Ohio Virtual Academy -- currently the state's largest online school -- will be shut down for failing kids rather than accountants), ECOT's academic performance for the kids it actually did educate was not much better than those it didn't.

According to state data from the 2016-2017 school year, every penny sent from a school district to ECOT last year (which was more than $100 million) came from a district that outperformed the online giant by at least 4 of 13 state report card categories. And an astonishing 1 out of every 4 dollars sent to ECOT came from a district that outperformed ECOT on every comparable measure.
This is not to say there weren't success stories at ECOT. There were. But in the vast, overwhelming majority of cases, ECOT simply did not provide a better academic option for students than the districts they left.

And while they did graduate large numbers of students, they failed to graduate about twice as many as they actually graduated. Some of ECOT's paid supporters like posting impressive photos of their Schottenstein Center graduations. They never post a filled Fenway Park, which holds about the number of students ECOT failed to graduate since its opening.

One telling metric of the school's long-term impact on kids is how many ECOT graduates have a college degree within six years of graduation. 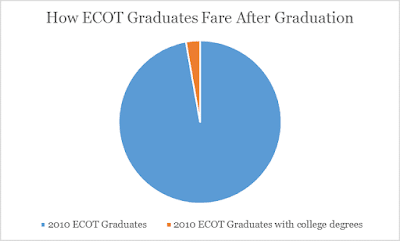 When coupled with the fact that ECOT was charging taxpayers tens of millions of dollars to educate kids that never participated in learning at the school, it's clear that this school was not living up to expectations academically or financially.

As I wrote before, ECOT has generally not performed well on state metrics and have been unable to account for the children's learning experiences, but they have until recently been protected by powerful friends in the Ohio General Assembly and state government who benefited from ECOT founder Bill Lager's political largess.

And now the Supreme Court will decide, essentially, whether the school should be paid for educating kids it can't prove it educated and therefore remain open forever.
Posted by Stephen Dyer at 11:26 AM 7 comments: