Betsy DeVos visits Van Wert. Her Privatization Agenda's Already Been There. A Lot.

U.S. Secretary of Education and school privatization advocate Betsy DeVos will be visiting Van Wert today. Van Wert is a little burg in Northwest Ohio. And while I welcome the visit (along with American Federation of Teachers President Randi Weingarten), I think it's important for everyone to understand what the privatization agenda DeVos has spent her life promoting has done to kids, families and taxpayers in Van Wert. I published my thoughts at Innovation Ohio yesterday, but thought I'd re-print it here today.


How School Choice Has Hurt Van Wert
..."As DeVos is one of the nation’s top proponents of school choice options like charter schools and vouchers, it is important for the people of the City and County of Van Wert to understand just how much these options have hurt the overwhelming percentage of children who attend the local public schools in Van Wert County.

Since the 2012-2013 school year, $3,744,988 in state funding originally meant for the children attending Van Wert County’s local public schools has instead gone to privately run brick and mortar and online charter schools, which generally perform worse on state metrics than Van Wert schools do. 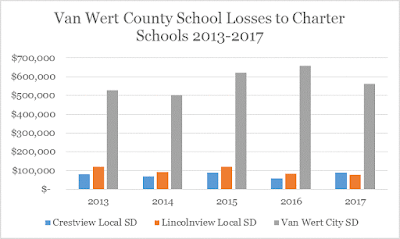 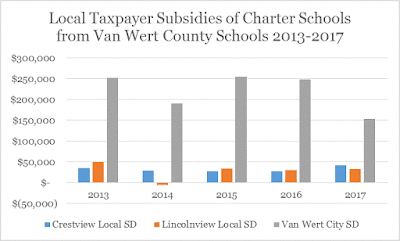 As if on cue, local property taxpayers in Van Wert County schools are paying $3 million more in property taxes in 2015 (the most recent available data from the Ohio Department of Taxation) than they did in 2013, which is increasing  those communities’ reliance on property taxes to pay for education – a result deemed unconstitutional four times by the Ohio Supreme Court."