It's really easy to sit back and make esoteric arguments about how Ohio's charter school funding system hurts kids who are not in charter schools. And there's a recognition from leaders in the Ohio General Assembly that the funding system -- which diverts state funding meant for a district to a charter -- is a shell game that leave school districts with far less state revenue than the state says they need to effectively educate their students. This, in turn, forces school districts to use sometimes large segments of their locally raised revenue to make up the difference.

But what does that mean for a kid attending a local public school district?

As an example, I'm going to use a student in Columbus City Schools. Let's assume he or she started first grade in the 2005-2006 school year, which would make this student a senior this year (by the way, I was first elected to the Ohio House in 2006. Wow, does this make me feel old!)

Yes, I know charters can't raise local revenue. However, the legislature has chosen to not put its money where its school choice mouth is and create a separate fund to make charter schools whole. Instead, they make up a chunk of the local funding disparity by removing extra state funding from the local school district's bottom line, forcing local property taxpayers to do their work for them.

So, for every student who began their Columbus City Schools career in 2005-2006, they have received $10,548 fewer in state revenue, with another $1,142 set to be lost this, their senior year (charter enrollment is so volatile, this figure could change substantially during the year). To give you a sense of scale, that amount equals about the amount of state funding these Columbus students received their first three years of school -- in many ways the most important years. 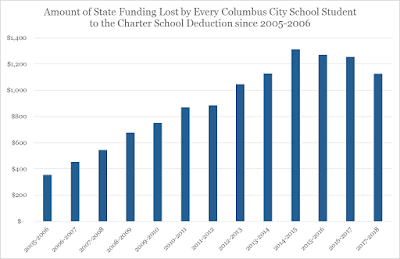 So because of Ohio's charter school funding system, kids in Columbus essentially are fully locally funded for about 3 of their 12 years in Columbus City Schools. The state only gives them their state funding for about 75 percent of their academic careers. All so schools like the nation's largest dropout factory -- the Electronic Classroom of Tomorrow (which has received the most money from Columbus of any charter for several years) -- can keep collecting their money and failing to graduate even 4 out of 10 students.

Yes, there are high performing charter schools in Columbus (and elsewhere). I visited one on Monday -- United Preparatory Academy - State. And they are doing great work for many kids. But at what cost to the 90 percent of Ohio's kids who aren't attending charters?

Let me say this is not UPA's problem. It's a state leadership and legislative problem.

But is it worth the relatively small successes statewide in a handful of charter schools so every kid (let me repeat, every kid) in Columbus loses 1/4 of their state revenue over the course of their academic careers?

And what's the impact on local taxpayers?

Local Columbus taxpayers have had to subsidize charter schools to the tune of $556 million during our hypothetical student's career. In other words, more than 1 out of every 10 dollars raised locally during that time frame have gone to fill in the lost state revenue to Ohio charter schools, increasing the district's reliance on property taxes to pay for schools, which is the exact opposite of what the Ohio Supreme Court ordered the state legislature to do four different times. 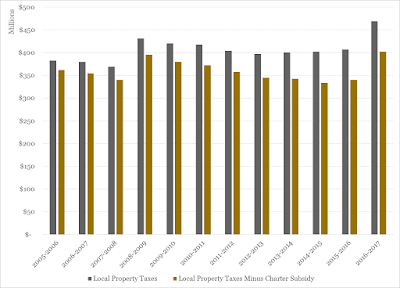 The chart on the left shows you how many local property taxes were raised in Columbus since the 2005-2006 school year (from the Ohio Department of Taxation), and how many were left after the state funding lost to charters was taken out.

These results are repeated throughout Ohio. Urban. Suburban, Small Town, Rural districts. No type of district is immune from these charter funding problems.

Statewide, the average Ohio student who started first grade in the 2005-2006 school year has lost $2,332 in state funding during their academic careers to the charter school deduction, with another $242 expected to leave in this, their senior years. And local taxpayers have been forced to use roughly 4 percent of their property tax levies to make up for that loss -- money no voter ever approved for such a purpose (except, it could be argued, for a 15-mill levy in Cleveland that partially goes to charters).

The system has been broken since the beginning. Ohio needs to develop a funding system that accurately calculates the cost of education in charter schools and doesn't fundamentally hurt kids whose parents choose to keep them in local public schools. Lawmakers need to put their money where their mouths are and fund charters fairly using their own, committed state resources, not exacerbate an already unconstitutionally funded school system that's increasingly reliant upon local property taxes.

Our kids desperately need this system to change so it can work for all of them. For it currently works for none of them.
Posted by Stephen Dyer at 10:12 AM