One of the key provisions of Ohio's new $71 million federal charter school grant is to, according to the state's cover letter, "Integrate quality charter development into the State’s new authority to create achievement school districts serving the children of the most dysfunctional school districts."

That's an EduSpeak way of saying they want to use a good chunk of the money to create more charter schools in Youngstown and any future area that's in "academic distress." (By the way, the only time "achievement school district" comes up on a search of the Ohio Department of Education website is in the state's grant application to the federal government. That designation doesn't exist in this state outside of the grant writers' rhetorical flair.)

But there is a major question: Should charters be seen as the rescuer of Youngstown City Schools? Recently released data would suggest that they should not, as I wrote briefly for Innovation Ohio.

This is not to say Youngstown is any great shakes performance wise.

Youngstown has struggled for years to improve their students' academic performance. But Youngstown's struggles are much less profound than Youngstown charters' struggles. And significantly less so. Let's look at the data, which I used to calculate each school's Performance Index (PI) in each proficiency test, along with Youngstown's PI (which is the state's amalgamation of proficiency performance and is used by the state to determine whether charter schools can open in a particular district with 120 being the highest possible score and 30 being the lowest) in each test. 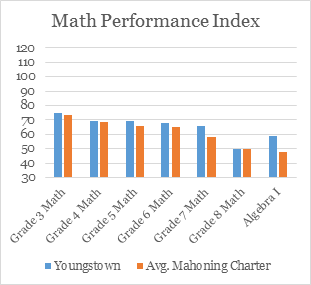 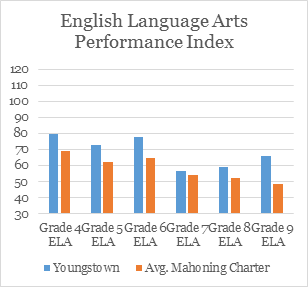 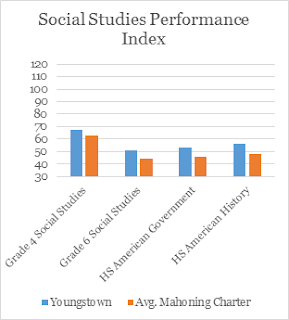 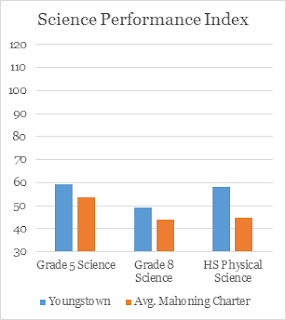 When comparing Mahoning County charter schools – the charters with the greatest percentage of its students coming from Youngstown, as well as the most obvious starting place to expand Youngstown’s charter footprint – with Youngstown, what becomes clear is that even the state’s lowest performing school district (according to the Ohio General Assembly) overwhelms its local charter competitors.

Beyond just using the average scores, it is also rare for any Mahoning County charter school to outperform what the Ohio General Assembly says is the state’s worst-performing school district on any comparable proficiency assessment. 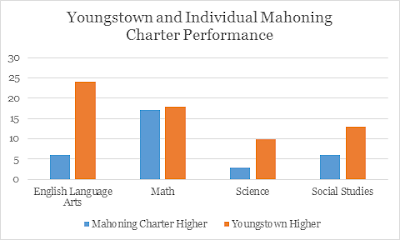 Youngstown does not have a ready-made group of high-performing charters in whom to invest, unlike a city like Cleveland with its Breakthrough Schools. The new CEO should carefully consider whether expanding Youngstown’s poor-performing charter schools should make up a the lion's share of the reform.