The Fabrications of a Charter School Zealot

In a recent post by the usually sound Aaron Churchill, the Fordham Institute researcher takes some significant pot shots at William Phillis -- the legendary Ohio public school advocate whose work led to the Ohio Supreme Court ruling four different times that the way the state funds public schools is unconstitutional.

I played on Churchill's title for my title of this post.

Unfair! cries Churchill. You have to weight the average per pupil expenditure. That way it's more fair. He points to the calculation he made in his recent report arguing that more money needs to be given to charter schools as the only fair way to possibly calculate what charter schools spend.

If you multiply the "unweighted" amount, it does. All weighting does is make it look like charters spend less than districts.

At the end of the day, taxpayers want to know how much of their money is being spent. And in charter schools, about $400 more is being spent per pupil.

In addition, Churchill ignores the fact that charters, on average, spend about $1,200 more per pupil on administrative, non-instructional costs than school districts. Even big urban districts spend $300 less per student.

So, in other words, if Ohio charter schools reduced their administrative spending to that of Ohio school districts, even on Churchill's "weighted" calculation, they would end up spending about the same as districts.

It's funny how free market reformers like Churchill quickly disparage "bloated" school district administration, but never point out that if charters were simply more efficient at spending money in the classroom, they wouldn't be begging for more.

That's because overall, charters spend about twice the percentage of their money on administrators as school districts do, equating to about 1 in 4 dollars spent by charters.

Next, Churchill goes to the old argument that charter students have far more challenging populations than school districts. Which is generally true, on average.

So, using Churchill's argument that schools with more challenged populations should get more money, it seems that the fact urban districts spend more per equivalent pupil than charters makes sense.

Churchill also failed to mention that while lots of folks are rightly concerned that 14 Ohio school districts received overall grades of F on the state report card last year, marking them for state takeover, if one applied that standard to Ohio charter schools, 103 of 340 charters receiving grades either received Fs or "Does Not Meet Standards" if they're a dropout recovery school (mind you that "standard" is graduating about 7 out of 100 kids in 4 years).

So 3 out of 10 Ohio charter schools would be set for state takeovers, if the state takeover law applied to them the way it does school districts.

Oh, and about $200 million of your tax dollars went to charters that would have been marked for state takeover, if they were treated like districts.

I anticipate Churchill will complain that I'm comparing all charters with all Ohio school districts. Charter proponents demand their performance only be compared with school districts and buildings that struggle the most.

However, every school district but one had at least some state money transferred to charters from their state funding. You don't get to take money from every school district, yet demand you be held accountable relative to the performance of the most struggling districts.

Especially when the current system forces local property taxpayers in those districts to fork over more of their property taxes to make up for the state funding transferred to charters.

And here is the breakdown of charter and district letter grades on the state report card this last year. As you can see, about half of all charter grades are F -- almost more Fs than all other grades combined -- and more than 7 out of 10 are D or F. Meanwhile, about 6 in 10 district grades were A, B, or C. 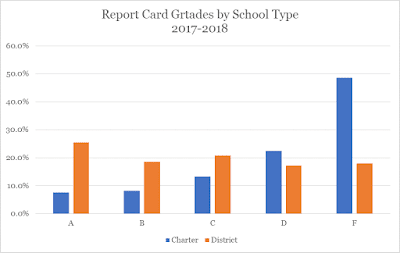 I guess what I'm most disappointed by though is Churchill's utter lack of deference and respect for Phillis, who more than any single person in the history of the state has held politicians' feet to the fire on equal and adequate funding for all students.

Frankly, Phillis has forgotten more education funding and policy than either I or Churchill will ever know. Churchill's cheap, ad hominem attacks on this man who has spent his life fighting for all kids to receive a world-class education is truly distressing.

My advice to Mr. Churchill would be to stick with trying to knock me around. Because with Phillis he is punching way above his weight class.
Posted by Stephen Dyer at 5:12 PM