Private School Enrollment Drops 14 percent since 2008. Why has their funding jumped 135 percent? 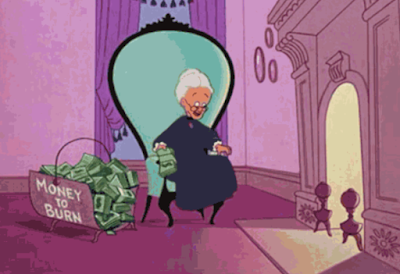 If you ever wondered what power looks like, I give you Ohio's private school lobby. Why do I say that?

Because on what other planet, in what other universe, in what other industry would increasing investment by 135 percent over 11 years in a service that lost 14 percent of their customers over the same time be tolerated?

Because that's exactly what's happened here in Ohio with your money.

Meanwhile, in the 2008-2009 school year, Ohio taxpayers sent $291,530,743 to private schools through busing, administrative cost reimbursements, auxiliary services and vouchers (SEE note below on what these are). This year, that number will balloon to $685,853,844.

Graphically speaking, here's what that increase looks like vs. the commensurate enrollment drop. 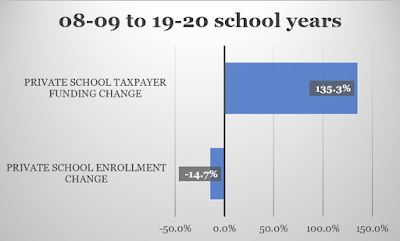 'Well, that's all driven by voucher funding, Steve. The funding for non-vouchers is actually pretty in-line with enrollment," you might say.

And you would be wrong.

Yes, the busing, administrative cost reimbursment and auxiliary services lines haven't exploded the way vouchers have (from $58 million in the 2008-2009 school year to more than $420 million today), but the increase is still significantly greater than what private school enrollment would seem to dictate. 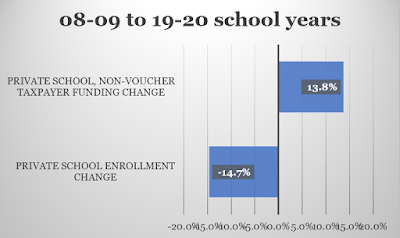 That increase to serve fewer kids seems to not make much sense.

And you would be incredibly incorrect.

First of all, the Ohio Constitution requires the state to fund a publicly accountable education system -- a system that was found to be inadequately funded by the Ohio Supreme Court four different times.

Nothing in the Ohio Constitution requires the state to provide a plug nickel to the state's private schools, which are not audited or held to nearly the same accountability standards as public schools.

But even ignoring that, in October 2008, there were 1,679,369 students enrolled in Ohio's public schools. In October 2019, there were 1,659,251. So there was an enrollment drop of 1.2 percent, which considering how many more students take vouchers and attend charters today than 2008, is kind of impressive.

And given that, funding for those students has basically kept pace with inflation. Meanwhile, public funding of Ohio's private schools has way outstripped inflation, even though enrollment has dropped in those schools by more than 12 times.

What has this meant on a per pupil basis?

In the 2008-2009 school year, Ohio taxpayers sent the equivalent of $1,702 per private school student to private schools. This school year, that number will be $4,696 -- or about $600 more than the state sends every kid in Cincinnati, Columbus, Northern Local in Perry County (the school funding lawsuit district), the average small town Ohio school district, and 46 percent of all Ohio school districts. 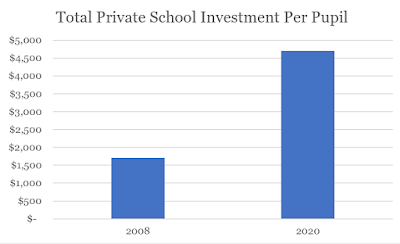 It's true. Not every private school student benefits from all this money.

Which is kind of worse.

It means that private school students who do get public funding receive substantially more than even the numbers I'm quoting here. And I remind you that the overwhelming majority of the schools receiving this money are religiously affiliated.

Not to open up that can of worms.

So how can the state justify a more than doubling of the investment in Ohio's private schools when enrollment in these schools is significantly falling?

Call your legislator. Ask them. See what they say. And as much as I bristle at referring to education in business terms, I would like to use the pro-privatizer language here to make a point: See how they justify taking your money and putting it into a business that's hemhorraging customers, especially in a business where we can't even find out how that money is being spent.

I'll be waiting for their responses.

Note: Ohio Department of Education enrollment data is not an exact science. If the headcount is above zero and below 10, the department reports "<10". So the exact enrollment count can't be easily discerned. What I did was take the median figure of 5 for every "<10" in the enrollment count sheet. But, like the U.S. Census, the actual enrollment count is a fairly narrow range of about 10,000 or so students. I used the same methodology for each year I examined. Also, transportation funding spreadsheets at ODE did not go back to the 2008-2009 school year, so I used the earliest one I could find for the 2011-2012 school year. Administrative cost reimbursements and auxiliary services have been Ohio budget line items for years. Administrative cost reimbursement is described by ODE as "the actual mandated service administrative and clerical costs incurred by such school during the preceding school year". Auxiliary services are costs for physicians, psychologists, and other additional services that are borne by the private school and taxpayers subsidize.
Posted by Stephen Dyer at 10:52 AM