What If Ohio Re-Focused on Education away from Prisons? 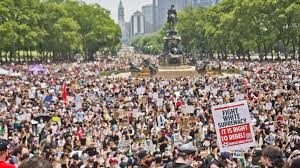 I know I haven't done much on the historic protests around the country. But I wanted to kind of put in Ohio budget terms what their goals about de-emphasizing law enforcement spending could mean for our communities.

So I dug into some spreadsheets.

The Ohio Legislative Service Commission (one of Ohio's finest bureaucratic institutions) puts out a spreadsheet every year tracing Ohio revenue and spending since the 1974-1975 fiscal year. So it's possible to trace the historic legislative appropriations patterns for the last 35 years.

What's amazing to discover is that while Ohio's commitment to K-12 and (especially) higher education has dropped since 1975, the percentage of the state budget going to corrections has skyrocketed from 5 percent in 1975 to nearly 15 percent of the non-human services budget in 2021.

I am excluding human services because spending there has exploded due to changing Medicaid rules and state spending requirements over the last 35 years. 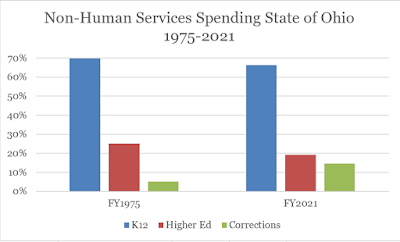 And while K-12 has dropped by about 3 percentage points, most of the transfer in priority to corrections has come from the state's higher education budget, which has dropped in state commitment by 25 percent. These are the two areas of the state budget that can actually prevent incarcerations.

The state has decided to triple the commitment to its prisons and drop the value it places on preventing people from going to prison by more than 10 percent.

What does this mean?

Very simply, it means that we have more prisoners. Which shouldn't shock anyone.

What if we changed the focus, though, and spent the same relative amount on education and prisons as we did 35 years ago?

The results are stunning.

What could that buy?

An additional $518.4 million would:
You get the idea. It would get us a lot. Without a single additional tax increase or new revenue stream. With simply the same budget priorities we had 35 years ago.

Re-focusing away from incarcertaion and back on education, as we did 35 years ago, would provide tremendous benefits for our kids and communities.

This is exactly what the protestors are asking us to do -- stop investing so much in law enforcement and instead invest in what we know reduces the need for law enforcement.

They have a point.

Re-emphasizing education as a funding priority would grant more folks greater opportunities at the American Dream, regardless of where they come from. That's what we should all get behind.
Posted by Stephen Dyer at 3:22 PM